Despite impressive medical advances, 100% of Canadians die. In fact, more than 259,000 Canadians die each year, and most die in old age. Of those, only a small proportion currently receives high quality hospice palliative end-of-life care. With the aging of our population, by 2026, the number of Canadians dying each year will increase by 40% to 330,000. By 2036, Canada will see more than 425,000 deaths a year.

The need is urgent and our capacity to respond is limited.

About the Life Blanket Project

The campaign focuses on partnering with notable Canadians; and community, business and government leaders who have agreed to promote a different way of looking at death and dying.

These notable Canadians then worked in collaboration with the Toronto School of Art, who recruited Canadian artists and art students to design a piece of artwork that would represent their life, through their own version of what a personalized life blanket would look like, using the blanket as a symbol of life-affirming art rather than one associated with grief, death, and fear.

About the notable Canadians and the artists who created their Life Blankets: 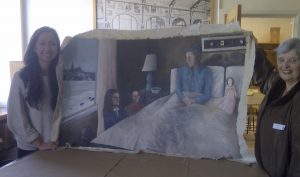 Sharon continues to be an active advocate for end-of-life care and also sits on the CHPCA Champion’s Council. As a proud citizen of the city of Ottawa, Sharon elected to work with an art student of Canterbury High School.

A word from the artist who created this blanket: A local student from Canterbury Highschool, Jade Lim Tung created a blanket that “portrayed the generational nature of life and death.” 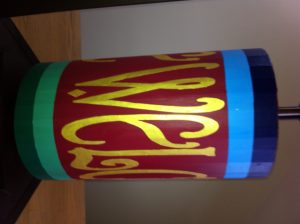 Rev. Dr. Brent Hawkes C.M. has been the Senior Pastor at the Metropolitan Community Church of Toronto for 35 years. As the Pastor, Rev. Dr. Hawkes has been at the forefront of ministry to the Gay & Lesbian Community in Toronto. He serves as spiritual leader to a faith community of more than 800 congregants at regular Sunday worship. As well, he has served the community at large with distinction, championing several Human Rights initiatives, especially benefiting the Gay & Lesbian Community.

He has constantly challenged the church to examine important issues such as prejudice against gays and lesbians, inclusive language as well as ordination of women. He has played a significant role in promoting the inclusion of sexual orientation in the Ontario Human Rights Code and the Canadian Human Rights Act. In 2007 Rev. Dr. Brent Hawkes was appointed the Order of Canada by the Governor General of Canada for his stand on Social Justice and Human Rights within the L.G.B.T. communities, the highest award a country has bestowed on a gay activist. In 2009 York University presented Rev. Hawkes with an Honorary Doctorate of Laws for his continuing work in activism and human rights in Canada for all. In 2010 he was presented with an honorary Doctorate of Laws from Mount Allison University, and in 2011received an Honorary Doctorate of Divinity from Trinity College.

A word from the artist who created this blanket:  Robin Pacific describes herself as a “general art practicioner” She created a Prayer Wheel  with “Welcome Home” as an homage to the church’s phrase, and along the top dark brown support, are the words “They desire a better country” in honour of Reverend Hawkes  receiving the Order of Canada. In collaboration with Frank Bunn. 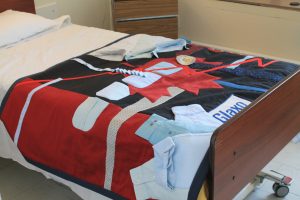 Under his leadership, GlaxoSmithKline has become one of the top fifteen investors in Canadian research and development and one of Canada’s leaders in charitable giving, gaining the Caring Company distinction from Imagine Canada.  For the last nine consecutive years, GSK has also been recognized as one of the 50 Best Employers in Canada, with 2009 marking the fourth consecutive year of being the top pharmaceutical employer.

Mr. Lucas has been very engaged in end-of-life care awareness, serving for 2 years on the CHPCA Champion’s Council.

A word from the artist who created this blanket: Angela Tamari is a Toronto artist known for collecting and working with organic subject matter. “I decided to deconstruct the man in order to find his essential elements.” 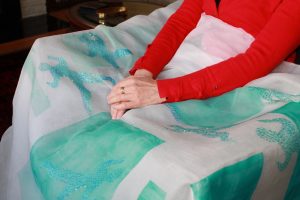 Sheila Catherine McCarthy is a Canadian actor, singer, and dancer. Sheila McCarthy, one of the hardest-working performers in Canadian film, television and on stage, began as a self-described “lovely little dancer girl” at the Thornhill Free School north of Toronto. Her first appearance on stage was at Toronto’s Elgin Theatre in Peter Pan at 6 years old. She attended the University of Victoria and spent a year studying with the influential acting teacher Uta Hagen at her HB Studio in New York City, and also workshopped with the Second City troupe in Toronto.

In the series “Emily of New Moon” (1998-2000), based on the novels by Lucy Maud MONTGOMERY, McCarthy played Emily’s aunt Laura and received 2 more Gemini Award nominations for best performance by an actress in a continuing leading dramatic role, winning in 1999. As a guest star on “Sesame Park” she won the Gemini Award in 2000 for best performance in a pre-school program or series. In 2001 she was in the short-lived series “The Endless Grind” as well as appearing in the last season of “Picket Fences.” In 2007 she secured a supporting role in the popular CBC series “Little Mosque on the Prairie,” which garnered McCarthy a Gemini nomination for best comedy actress.

A word from the artist who created this blanket: Jeanne Jabanoski is a textile artist based in Toronto who stated “the work purposely has no beginning and no end, as an amorphous figure moves through a series of windows or life phases, swimming, dancing, falling, playing (sometimes alone, sometimes with others), and flying until moving off the work towards infinity. “ 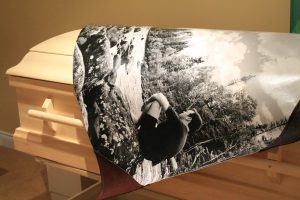 Gordon Pinsent was born on  July 12, 1930 in Newfoundland and has become one of Canada’s most beloved and well-known actors. He began his career at the Manitoba Theatre Centre, which led to roles at the famed Stratford Festival.

In 2003, Pinsent received the ACTRA Toronto Award of Excellence and in 2004, an Award of Excellence at the Banff Television Festival and was inducted in 2007 into Canada’s Walk of Fame. His autobiography, By the Way, was published in 1992. He continues to work steadily both on TV and in film. He lives alone in Toronto since his wife’s death in January 2007.

A word from the artist who created this blanket: Artist Renita Fillatre is a fellow Newfoundlander and traveled to Mr. Pinsent’s home area to help create the vision for his life blanket. 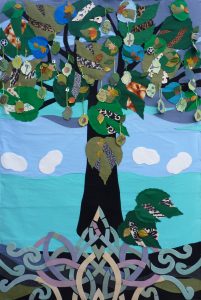 Fluently bilingual and irreverently witty, the founder and president of Park Ex Pictures is an admired figure on the Canadian film scene. A fixture on panels at industry events and key festivals, Kevin Tierney is an enthusiastic supporter of Canadian filmmaking, offering his time to institutions like the Cinémathèque québécoise.

A word from the artist who created this blanket: Corinne Duchesne is a visual artist whose practice is informed by emotional and philosophical considerations of grieving, is a reflection upon the reality of loss within life and an integration of this understanding.